BRITISH COLUMBIA
Vancouver Chinatown
加拿大温哥华唐人街
This page presents information in terms of the places where Northwest American Chinese originated, lived and worked.  The places in question include southern Guangdong province in China and the area stretching from the far northern part of California to Alaska and from the Pacific coast to the western parts of Montana and Wyoming.    Chinese played a role, often an important one, in the history of all parts of the Pacific Northwest.  Their home districts in China often dictated where they settled in North America, how they organized themselves, and what they did for a living. 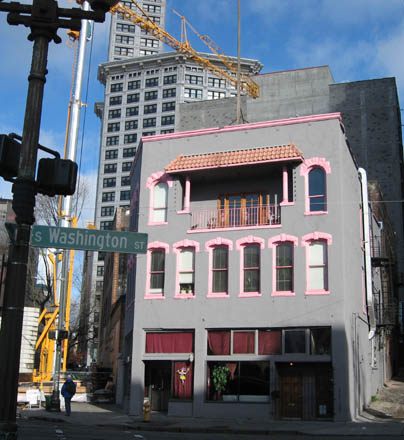 墨加斜何
Chinese place names in the Pacific Northwest, 1880-1890 西北角中文地名
from the unpublished account book of Chin Gee Hee, a Seattle merchant. 晚清陈宜禧的翻译
This and other place name lists will be included here because of their usefulness to researchers using Chinese-language sources on the history of the region.  The Chinese place names in those sources are often incomprehensible even to the most literate reader.  A good example is the effort by a well educated Chinese student working with Prisicilla Wegars and the Asian American Comparative Collection at the University of Idaho.  The student transcribed part of the trade mark on an early opium can as "Yudouli" (click here to see the trade mark).  This made no sense.  If the student had read it in Cantonese, "Wik To Lei," she/he might have guessed that it meant "Victoria," and connected the can with one of the well-known opium factories in Victoria, British Columbia.  But in many cases, even a good dictionary and a thorough knowledge of Cantonese and Taishanese do not help, especially when--as is often the case--the accepted Chinese version of a place name was changed in later years.
This is why we are putting things as boring as place name lists on line.  They are not much fun to look at.  But, for historians who work with Chinese-language primary sources, they are vitally important.
WASHINGTON, continued
New Slope

梳力失地
Pacific Northwest
Cities in the Northwestern Region with Chinatowns.  Almost every city and town had one, although in many cases it has not survived.
清末民初西北角中文地名.  A List of  Chinese place names for the Pacific Northwest  in the late 19th century, from the unpublished account boooks of a Seattle merchant.  Also a list of place names in BC from a 1901 directory.  For use by historical researchers using Chinese-language sources.
Southern China
君从哪里来? 都是广东人!.  Home counties and sub-ethncity of Chinese immigrants, from a 2010 study by Henry Yu of the Unversity of British Columbia.

域多利
Chinese place names in British Columbia, 1901 加拿大卑斯省中文地名
from the International Chinese Directory 1901, published by the Chinese Directory Company, 606 Montgomery Street, San Francisco, CA.  1901年中文商业指南
The 1901 edition of the International Chinee Directory:was the first of two editions to be produced, almost single-handed, by an amazingly hard-working Chinese businessman in pre-Earthquake San Francisco.  Very few copies of either edition survive.  We borrowed the one we used from Philip Choy, who is not only a leading historian of Chinese America but a supportive and generous mentor to researchers who, like the editors, are new to subjects that he has long since mastered.
This list is taken from the account book of Chin Gee Hee [Chen Yixi] 陳宜禧 (1844-ca. 1924), one of the most talented and creative Chinese businessmen in Seattle's history.  The book is now stored with other Chin Gee Hee papers in the Special Collections division of the University of Washington Library.  The list has not been published previously. 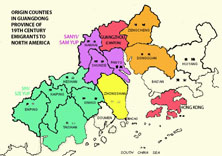 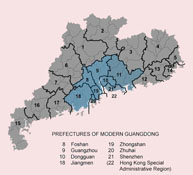 Modern prefectures in Guangdong; 19th century emigrant origin areas in blue. From Wiki Commons
19th century counties of origin in Guangdong for emigrants to North America
On "Death", another page, of this website we presented data on sub-ethnic origins of Canadian Chinese buried at the Harling Point cemetery in Victoria BC, as assembled by Professor David Lai of the University of Victoria (Note 1).  Until very recently, that was the best compilation of early Chinese immigrants listed by home county available for any part of North America.  Lai's compilation, based on records of mass and individual graves, was as follows:
Birth Counties of  Chinese Buried in Harling Point Cemetery, Victoria
County

7
Modern Prefectures in Guangdong
Historic Counties in Central Guangdong
Now, however, new and more comprehensive data has been assembled, by Professor Henry Yu 余全毅教授 at the University of British Columbia, his students, and the Asian Library of the same university, under the leadership of Eleanor Yuen 袁家瑜.  The data was first persented to the adademic community at a workshop held at UBC on May 18, 2010 (Note 2).  The data comes from the digitization of all Canadian head-tax  人头税 records (the so-called General Registration of Chinese Immigration--for the online but non-digitized version, see Note 3) from 1885 to 1949 and covers almost 100,000 individuals.  Although similar information about the village-level origins of Chinese immigrants to the U.S. exists in the National Archives and Records Administration's Chinese Exclusion Files, extracting that will require many years of work and a great deal of money.  For the foreseeable future, the results of Yu's project will be considered definitive with regard to sub-ethnic affiliations of early Chinese in North America..
Main Sources of Chinese Immigrants to Canada, 1885-1949
CountyNumber of Immigrants

203
Home Counties in Guangdong and Sub-Ethnicity of Immigrants
君从哪里来? 都是广东人!
Although obscure to many historians, the sub-ethnic identities of Chinese in North America--that is, their home districts and hence their dialects and social connections--are one of the main keys to understanding immigration patterns, economic choices, and community dynamics.  In the eyes the immigrants themselves, home districts were usually conceived in terms of one's county (Cantonese Yup; Mandarin Yi or Xian), historically the most stable geographical subdivision of China and one whose boundaries often are marked linguistically as well as administratively.  People from the same county tend to speak the same dialect or sub-dialact, and to speak differently from people in neighboring counties.  Even now, Chinese in and outside China often name their ancestors' home county when asked "Where are you from?" or "Where is your home?"
Until the 1980s, almost all overseas Chinese came from a small number of counties in Guangdong and Fujian provinces.  North American Chinese came from even fewer counties, all of them located on or near the Pearl River estuary in central southern Guangdong.
As in Lai's more restricted study, this data shows that immigrants from the Taishanese-speaking "four-county" or Siyup or Siyi area 四邑 (Taishan, Xinhui, Kaiping, and Enping, with Heshan added later) were numerically dominant.  Immigrants from the "three-county or Samyup or Sanyi area 三邑 (Panyu, Nanhai, and Shunde) were in second place, followed closely by Zhongshan and then by Zengcheng and Dongguan, both far behind.  The Samyup counties speak a somewhat rustic version of "standard" Cantonese, the language of Guangzhou and Hong Kong.  Zengcheng, and Dongguan speak dialects that are slightly further from standard Cantonese, and while the Zhongshan dialect is distinctive and, to the ears of native speakers, influenced by various neighboring speech groups, it is still mutually comprehensible with the standard form of the language,  Spoken Taishanese, on the other hand, is not understood by Cantonese speakers.  Hence, it constitutes what many linguists would call a separate language that is closely linked to but outside the Cantonese dialect cluster.
A third and quite separate language is that of the Hakka 客家人, a group which has moved into many parts of Guangdong in recent centuries,  Because they were minorities in their home counties and recorded in Canadian records by county name rather than speech group or subethnicity, it is not possible to estimate how many Hakka were present among immigrants from Taishanese- and Cantonese-speaking counties (Note 4).  There clearly were a good many--Victoria and Honolulu both have old, important Hakka temples, and Hakka were one of the few Chinese immigrant groups with prior experience in placer gold mining of the sort practiced by Chinese in California, British Columbia, etc..
Note 1  David Chuenyan Lai, "The Chinese Cemetery in Victoria," B.C. Studies, No. 75, Autumn 1987, Tables 2 & 3
Note 2  Workshop on he Taishan and Zhongshan Immigrants in North America, UBC Asian Centre, hosted by the UBC Asian Library, UBS INSTRCC, and the UBC Dept of Hstory.
Note 2  http://www.collectionscanada.gc.ca/databases/chinese-immigrants/index-e.html
Note 3: Arnold Genthe & John Kuo Wei Tchen  Genthe's Photographs of Old San Francisco's Chinatown.  Dover Pubs., 1984, p 81.
Note 4: McKeown estimates 15%.  See Adam McKeown, Chinese Migrant Networks and Cultural Change.  Chicago, 2001, p 63

Why are these ethnic/linguistic identities important?   Because, for one thing, they lay at the center of many inter-Chinese conflicts in North American Chinatowns during the 19th and early 20th centuries (Note 5).  In San Francisco, for instance, knowledgeable non-Chinese often saw outbreaks of tong violence as struggles for economic dominance between Sam Yup and Si Yup-affiliated tongs, with Hakka (Yen Wo) tongs watching interestedly from the sidelines.   For another, the existence of subethnic divisions gave special significance to the few pan- speech group organizations, such as the Chinese Consolidated Benevolent Association 中华会
馆, Chinese Freemasons 致公堂, 達權 and some temples.
Search this website
金山西北角 - 华裔研究中心
(UNLESS OTHERWISE STATED ALL DATA ON THIS PAGE COMES FROM THE EDITORS' OWN RESEARCH ON PRIMARY SOURCES & ARTIFACTS)
版权 Copyright is free for non-profit use: : click here for more information
Northwestern Chinatowns
Chinese neighborhoods, sometimes but not always ghettos in which Chinese were forced to live, existed in most cities in the region.  Alaska was the exception: there, the small number of year-round Chinese residents lived either as caretakers in canneries or as dispersed service providers in such towns as Juneau and Sitka.  Many canneries, which in Alaska were almost always isolated from other settlements, had numerous Chinese workers during the salmon season but were nearly abandoned for most of the year.  The workers lived in the contiguous U.S., the majority in California or Oregon.
The decade1880-1890 marked the high point of Chinese population in much of the region.  In those years the following settlements had significant numbers of year-round Chinese residents:
British Columbia: Barkerville, Cumberland, Kamloops, Kelowna, Lilloet, Nanaimo, New Westminster, Quesnel, Quesnel Forks, Rossland, Vancouver, Vernon, Victoria, and Yale.  Delta and Steveston each had substantial seasonal populations of cannery workers.
Idaho: Boise, Idaho City, Lewiston, Oro Fino, Placerville, and Silver City.
Montana: Butte and Helena.
Oregon: Astoria, Baker City, Jackson, John Day/Canyon City, Pendleton, Portland, and The Dalles.  Several small settlements on the Columbia River hosted seasonal cannery workers.
Washington: Seattle, Olympia, Port Townsend, Spokane, Tacoma, and Walla Walla.  Anacortes, Bellingham, Blaine, Cathlamet, and San Juan Island had canneries with seasonal workers.
The Cities page of this website includes summary histories of Chinese in Astoria, Port Townsend, Portland, Seattle, Tacoma, Victoria, and Vancouver.

Return to home page
Top of page
This page was last updated: August 30, 2018