Chinese in Northwest America Research Committee (CINARC)
Search this website
This page was last updated: August 30, 2018
Click here to see what's new on this website
(UNLESS OTHERWISE STATED ALL DATA ON THIS PAGE COMES FROM THE EDITORS' OWN RESEARCH ON PRIMARY SOURCES & ARTIFACTS)
THE SOCIAL STATUS OF MERCHANTS
华商的社会名望
Imperial Honors for North American Chinese 美洲华商拥有晚清官衔
A Tacoma museum director, in the process of deaccessioning imperial clothing items plus other Chinese artifacts, recently commented:  “We are selling these items to build a collection that helps tell the story about the Chinese in the Northwest through art.  Help me understand how Chinese imperial robes do that.”
Were such robes really irrelevant to Chinese in the Pacific Northwest?
It turns out that the wearing of imperial robes by American and Canadian Chinese was not at all uncommon before the 1911 revolution (after that, of course, such robes were deeply unpopular), that the individuals involved not only had a right to wear such garments but paid high prices for that right, and that the status thus gained had real meaning, in China as well as in North American Chinese communities.
We should not be surprised to find that many well--to-do Chinese merchants in Americas earned the right to wear official outfits.  The practice of acquring official titles, or honors, through monetary contribution was common in China under the Qing regime.  The earliest bought title recorded in Singapore/Malaysia was in 1869, by Zhang Fanglin 章芳琳. (Note 1)
Back in China, businessmen had, in theory at least, ranked very low—indeed, below farmers, although somewhat higher than prostitutes, policemen, and grave diggers.  In practice, wealthy merchants had for centuries managed to enter the upper classes, hobnobbing with high-ranking officials and intellectuals and able to call on favored treatment by the government.  In Europe, merchants like the Rothschilds had found that great wealth often trumped noble blood.  In China, the powerful merchants who controlled the salt monopoly and the semi-licit opium import trade were reputed to be among the wealthiest individuals in the world.  Like their European counterparts, they managed to purchase respectability if not quite equality.
North America differed from China in having a social system that valued business success and automatically treated businessmen, especially wealthy ones, as members of the upper classes.  The only problems for Chinese North Americans were (1) that the system had been set up for whites, not Chinese, and that (2) many Chinese immigrants were poor, at the beginning at least, and uneducated.  Even if they struck it rich in Gold Mountain, they would still have to treat minor Chinese diplomats in San Francisco and Victoria as vastly superior to themselves.  And they could have real problems after returning to their home villages in China, dealing with a system controlled by officials who respected classical education much more than business acumen and who would not hesitate to extort large sums from a returnee at the slightest excuse.
The solution to such problems had already been found by Chinese businessmen in Hong Kong and Southeast Asia.  They could take advantage of long-established but increasingly corrupt Chinese government programs for selling honors in return for monetary contributions, either for charitable purposes like flood and famine relief or in return for outright bribes.  Perhaps the most popular honor of this kind was a grade in the Chinese civil service system.  Although such grades were only nominal, they had prestige, were respected, and even had a certain amount of actual authority.
Consider, for example, the case of a rich, self-made Hong Kong businessman, Ko Man Wah.  He often had to travel to Bangkok and Singapore as well as his family home, Cheng-hai near Shantou.  "On one occasion, when he returned to Cheng-hai in 1856, he was arrested by mandarins for 'collaborating with barbarians.'  Obliged to pay eight hundred silver taels to absolve the charge, he learned a hard lesson about the importance of official connections for self-protection.  Subsequently he purchased a fifth rank official title to protect his family and property in China.” (Jung-Fang Tsai, Hong Kong in Chinese History, 1993: 72-3)

Local merchants, including several in official robes, posing with high-ranking imperial commissioners on shipboard at Port Townsend or Seattle, 1906.  Permission pending: Museum of History & Industry, Seattle
Honorary Consul Goon Dip 阮洽 and family, Seattle or Portland, 1908-1911.  Goon wears a dragon robe beneath his surcoat.  He and his wife both wear official necklaces and surcoats with rank badges of the fourth grade.  Credit: Dick Kay, Seattle.

Decoding the Rank of Imperial Officials   官衔等级制度
During the Ming and Qing dynasties (1368-1911), positions in the civil government hierarchy had great social prestige.  There were nine official ranks, from Grade1, which included the prime minister and a few other leading figures in the capital, to Grade 9, that of the lowest and most junior government officers.
Rank Badges or "Mandarin Squares"  文官九品補方
From 1st to 9th grade, the non-military order ran as follows: crane, golden pheasant, peacock, wild goose, silver pheasant, egret, mandarin duck, quail, paradise flycatcher.  Because designs were only loosely specified, the badges can be hard for a casual observer to identify and may look more or less alike.  The key to identification is the tail (for most species), the head (for cranes) and body color (for the two kinds of pheasants), and the overall body shape (for quails).  The badge birds were not meant to resemble their real-life counterparts.
Finials on Formal Hats   顶戴
“An officer of the first grade wore a translucent red ball (originally ruby); second grade, solid red ball (originally coral); third grade, translucent blue ball (originally sapphire); fourth grade, solid blue ball; fifth grade, translucent white ball (originally crystal); sixth grade, solid white ball (originally mother of pearl). Officers of the seventh to ninth grade wore gold or clear amber balls of varied designs.” – Wikipedia, Qing official headwear

The Social Status of Chinese Businessmen in North America 侨社栋梁
Chin Gee Hee 陈宜禧 in 1905.  The dragon robe under his surcoat can be recognized by the diagonal stripes on the bottom. The rank badge depicts a peacock, placing him in the 3rd grade.  This may be the highest rank achieved by an American Chinese.  Credit: courtesy of the Wing Luke Museum. 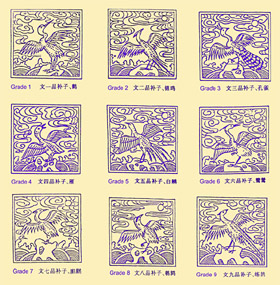 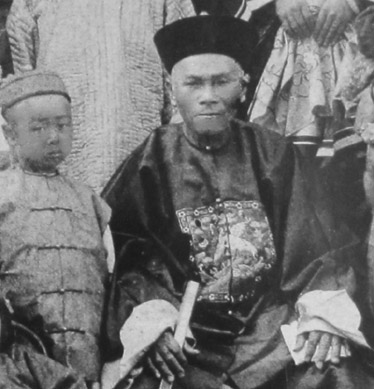 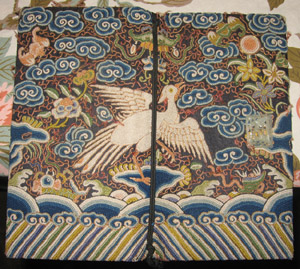 Imperial regulations governed the costumes each level of official could wear at court and on formal occasions.  The nine official ranks.were generally distinguished by (1) the colors of belts or girdles they were allowed to wear, (2) the materials of the long necklaces worn over the court robes, (3) the finial or spike on top of the formal hat, and (4) the square (or in  the case of the imperial family and household, round) emblems sewn on the front and back of a plain-colored surcoat worn over the court robes.  Wives wore the same costumes, with the same rank symbols, as their husbands.
Interestingly, except for the emperor's relatives and household staff, the robes themselves were not ranked.  On special occasions, all levels of officials who could afford them, including very junior individuals, wore so-called dragon robes.  In the late Qing dynasty, for the century preceding the 1911 revolution, many individuals of varying status were entitled to wear robes with the five-clawed dragons once theoretically reserved for the emperor (supposedly lower-ranking robes with four-clawed dragons are in fact much scarcer than the five-clawed kind).
The dragon robe itself, together with the girdle, was generally hidden under the surcoat.  As a result, the status of a given official was likely to be recognized by only two indicators: his hat finial and, most visibly, the square rank badge or “mandarin square” on his plain black or dark blue surcoat. His necklace was also visible but not easily interpreted in terms of official grade.

Vancouver's Soon Town in dragon robe, 1930s.  An early collector of local memorabilia, Soon may well have bought the robe from the family of a Vancouver Chinese who wore it before the imperial period ended in 1911.
Credit: Vancouver Public Library, Special Collections

Thus far, we know of about 20 Northwestern Chinese who held official ranks and were thus entitled to wear dragon robes, surcoats with badges, official hats with appropriate finials, and the other markers of their positions.  As most of our data comes from a single document listing donors to Portland's Imperial Chinese School, compiled in 1910, it seems certain that many other Chinese Northwesterners had sought and received official ranks before the overthrow of the imperial government by Sun Yat-sen's revolution in 1911.  As may be seen, most were fifth or sixth rank officials.  They and their wives would have worn surcoats with rank badges depicting silver pheasants or egrets. 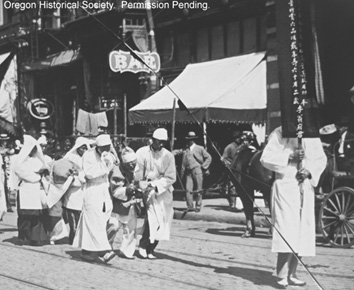 Funeral of one of the Lee (or Li) clan, Portland, ca. 1890.  The vertical sign carried by the lead mourner states that the deceased held a 6th grade official rank.
Credit:Oregon
Historical Society 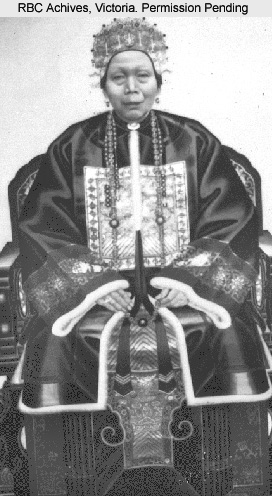 Goon Dip's wife, wearing the 4th grade outfit to which her husband was entitled.  Credit: Dick Kay.
Lee Mong Kow's mother wearing the official outfit to which her son was entitled, painted posthumously.  Credit: RBC Archives.
Even in Far-Off Idaho 爱达荷州矿山华商也有官衔
The early gold-mining towns of southern Idaho are still remote.  Back in the 19th century, they must have seemed close to the ends of the earth.  Yet even there, Chinese residents were actively interested in imperial honors.  On example is that of  Loke Di Sang of Idaho City, one of the area's most successful Chinese businessmen.  The two following photographs are details from family portraits taken in 1880 and 1900, probably made for sending to relatives back in China.  They show that Loke had risen in the ranking system i the intervening twenty years.  In 1880 he belonged to Grade Seven or Six.  By 1900, he had advanced to Grade 5. 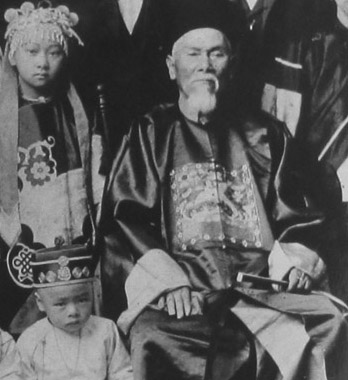 Loke Di Sang, Idaho City, 1880.  Credit: Pon Yam House, Idaho City
Loke Di Sang, Idaho City, 1900.  Credit: Pon Yam House, Idaho City
Even more remote: the quasi-ghost town of Placerville west of Idaho City, once home to a moderately prosperous gold mining industry.  The locally-supported private museum there has a good collection of historical artifacts that include a fairly large number of items formerly used by local Chinese miners.  One such artifact is shown here: a rank badge or mandarin square depicting a paradise flycatcher, indicating that its owner held an honorary ninth rank in the Chinese civil service.
The local residents who take care of the museum do not know the history of this rank badge, and it is possible that someone collected the badge elsewhere and brought it back to Placerville.  Yet Placerville, with a current year-round population of less than twenty, is not that kind of place.  It is hard to believe that the badge does not belong to the same locally-used artifact assemblage as the other Chinese items in the museum.  If so, the badge probably belonged to a local Chinese miner who at one time grew rich enough to buy himself an official title: a low one to be sure, but real nonetheless.
It is wonderful to think that the prestige of an ancient bureaucracy, established by a centuries-long succession of emperors in distant China, once reached as far as Placerville, Idaho.  The badge's owner must have been proud and his fellow gold miners impressed.
Ninth grade rank badge in the Placerville (ID) Museum
九品補方
Return to Top      Return to Business page
Imperial honors for North American Chinese  3/18/2013
The social status of Chinese businessmen in the U.S.
and Canada before 1911  3/18/2013
Decoding the rank of Imperial officials  3/18/2013
Why this is relevant to the Pacific Northwest  3/18/2013
Even in far-off Idaho  3/18/2013